Yes, you read that right. In this article, I am going to detail the process of getting Debian 0.91 up and running in qemu on an Ubuntu 16.04 host. The adventure promises to be a fun one since Debian 0.91 was released in… 1994.

In order to get this running, we need to install qemu itself:

We also need the installation files for Debian. They are not distributed as an ISO file but rather as floppy disk images. Thankfully, an archive of everything we need exists:

From this point on, all of the files we will need are stored in debian/debian-0.91/dist, so let’s switch to it:

Before we can use the floppy images, we need to decompress them:

We are now ready to start the VM:

If everything worked correctly, you should see this screen: 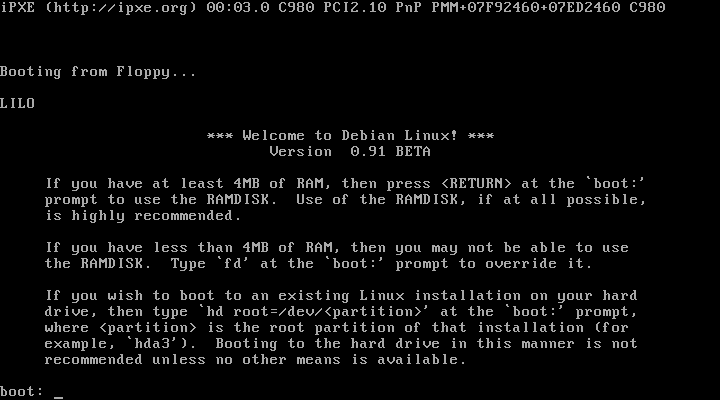 When you receive the “Welcome to Debian” prompt, run dinstall.

Once dinstall loads, you will be presented with the installation menu:

Select option 1 to partition the two disks. When asked “Which disk do you wish to partition?” enter hda. You will then need to create a partition on the disk. Type “n” when prompted for a command. Use the following answers for the prompts:

Once this is complete, type “w” to write the changes to disk. When prompted to reboot, choose “n” (no) since the second disk needs to be partitioned as well. Follow the same steps but enter “hdb” for the partition. Now you can reboot.

Follow the same steps to return to the dinstall menu. Now choose option #3 (Format your Linux native partition(s) with mke2fs). Run this option twice - once for hda1 and once for hdb1. You can select “n” (no) when prompted to check for bad blocks.

The next question asks which floppy drive we are going to be using to install the base system. Type “fd0” to continue.

Now the tricky part: the boot disk is still in the virtual floppy drive but we need to change it to the base installation disk. In order to do that, we need to switch to the qemu console using Ctrl+Alt+2. Type:

Now press Ctrl+Alt+1 to return to the VM and press Enter. Repeat these steps for the second disk (base/basedsk2).

What follows is a sequence of questions:

Once the script completes, you can reboot into your new system. Choosing option #7 in the menu and typing “reboot” should do the trick.

Once the reboot completes, you will once again be given the LILO boot prompt. This time use the following command instead of pressing Enter:

Type “root” at the debian.local login screen. You should immediately end up at a working Bash prompt: 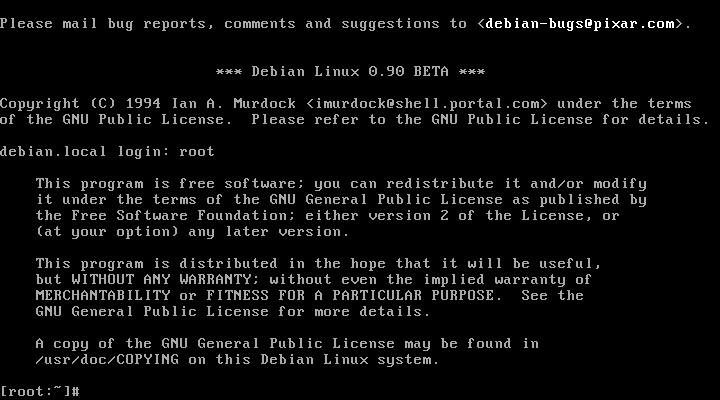 Go ahead and explore the system!

Debian is well known for its package management system. In order to install packages, we’re going to need to copy them to the packages partition. Shut down the VM by running the “halt” command and then closing the qemu window when it finishes.

This will copy all of the packages to the second hard drive image so that dpkg can use them.

Boot the system again and run dpkg. The following menu is displayed: 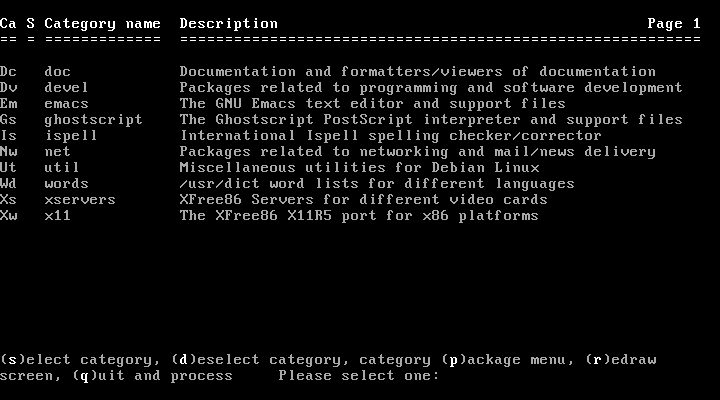 To complete the installation, run the following command:

Press Enter to mount the partition and install the packages. Once it completes, press “q” and then Enter three times to continue.

Scroll down to the following line:

Now you can run:

fvwm (a window manager) will then load: 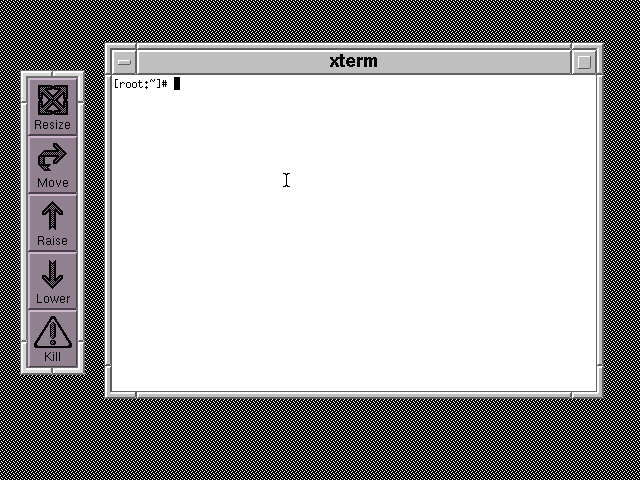 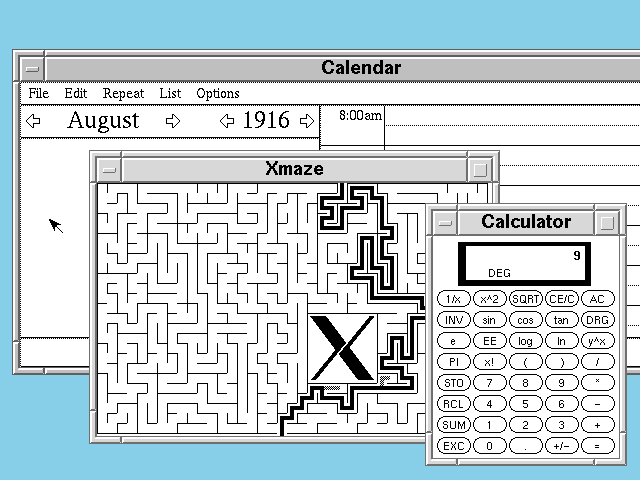 qemu is an incredibly flexible emulator. I continue to be amazed at how many commands and utilities that were in use 22 years ago are still with us today: fdisk, mount, vi, ifconfig, etc. It is also amazing that this all still manages to run in an emulator.